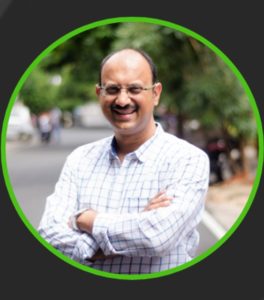 Our Speaker Madan Padaki started his talk by saying “Every Changemaker is an Entrepreneur and Every Entrepreneur has to be a Changemaker and that is when the world will be a better place.” Madan’s approach to this talk was bit unique as he started by asking the audience on what exactly they are looking to learn on Entrepreneurship, taking a question from one of the audience “How to manage the shift from Non-profit to profit”? Responding to this question Madan explained Every enterprise must be social by nature and by definition.

An engineer from NIE Mysore and an MBA from SPJIMR, Mumbai, Madan Padaki had worked with Wipro, Infosys and Mphasis (Japan) – before being bitten by the entrepreneurial bug in 2000 when he co-founded MeritTrac as a pioneering idea in skills assessments. MeritTrac is today one of the leading Skills Assessment companies in the World and is recognized as a thought-leader in the sector, having won several awards like the NASSCOM Innovation Award & Deloitte Fast 50 India Award.  MeritTrac has also been featured extensively in several books on entrepreneurship and is also a case-study at INSEAD. MeritTrac was acquired by Manipal Global Education Services, one of India’s largest education services company. In 2011, he transitioned to Manipal Education from MeritTrac to head up Strategy, Innovation and International Partnerships and transitioned out in March 2013.

He is currently the Co-founder & CEO of RubanBridge Private Limited, a rural last-mile services platform provides access, choice & convenience to rural consumers by leveraging the power of local entrepreneurs & technology. Today, 1Bridge as a brand under RubanBridge is present in 25+ districts across South India and has over 400+ rural youth engaged on its platform.

Madan is also the co-founder & Trustee of Head Held High Foundation, a non-profit that stands for human

dignity. Head Held High Foundation’s vision is a world of abundance, in which poverty has no place. HHH focuses on initiatives for poverty eradication like Make India Capable, where a rural youth with no schooling, in 6 months is transported to being extraordinary capable as a person, and work-ready in a professional environment and Global Action on Poverty (GAP) a platform that builds and supports Changemaking communities to eradicate poverty.

He is also a founding Partner of Social Venture Partners, Bangalore and is the Convener of the Million Jobs Mission – an initiative to help leading livelihoods organisations achieve scale through a support network. He is also an active member of the Governing Council of TiE Bangalore and had served as a Senior Advisor to Tata Trusts between 2015-2016.

Madan is a sought-after speaker at various conferences around the world and has shared his innovative ideas & thoughts at prestigious forums like TEDxGateway, TEDx GolfLinksPark, INK Conference, etc.