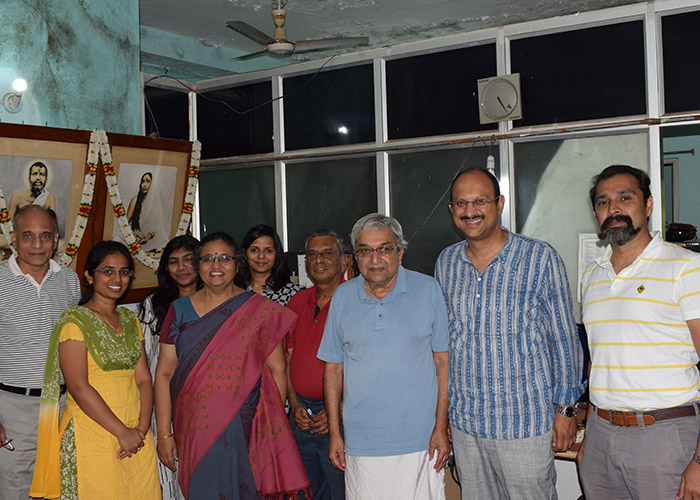 On 15th Sept  afternoon  in the  serene  environment of Saraswati Hospital, I met  a Karma yogi who is a living example of ‘Seva through Karma’ He is a eighty year old young man who is an allrounder ,volunteering with  energy & enthusiasm by extending his ever helping hand to rural sector of our society through his motto of’ sight to the sightless ‘. He has by far helped 41,500 through free health camps in remote rural areas of  North Karnataka. As he spoke with the sparkle in his eyes about  the thousands of lives ‘Sri Vivekananda Sevashrama’ has touched & many more lives  he wants to transform in the coming years;I realised that the only thing  if he  is not equipped to is conducting eye surgery , as he doesnot have  professional qualification.

I was  all in  awe of  this Retired Engineer from HAL, who  started this  noble work out of passion  with a vision to address neglected  poor rural old people of North Karnataka. Twice in a month they  conduct 3 day long camps. He  travels  with a team of Doctors & Volunteers to rural areas  along with a van carrying  all medical equipment & consumables from Bangalore to  rural areas to conduct free cataract surgeries. In one camp , they conduct around 250 -300 cataract surgeries. That’s one surgery per 7 minutes.

The Pre-operation , operation & Post operation care are taken care of  so well that  they have 100 % successful surgeries. There isn’t a single case of failure to date. That is the  level of passion , commitment  & Integrity  of this gentleman.

The way he is running the  entire show  with a defined process, that he acquired over 40 years through practical experience is worth a management case study for “ Six sigma” – as rightly pointed out by  GAP Intensive A team members.

The first impression & interaction with Venkateshji gave GAP Intensive A team members the feeling that  it’s worth being associated with ‘Sri Vivekananda Sevashram’ for GAP Intensive. From the interaction with Venkatesh Murthy I realized that for any social work to sustain, a single (or group) person’s vision can be kicked off well. But to get the scale and sustainability, getting the young people to invest their capabilities and instilling  a passion in them is really important. That’s where  the GAP Intensive  A Team joins hands..