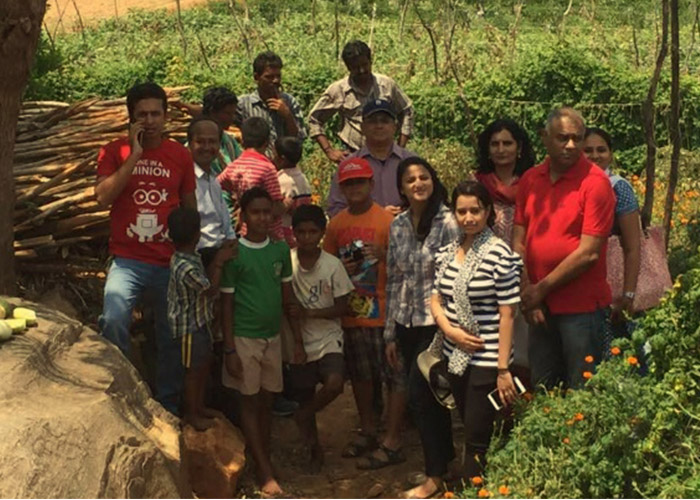 A Day to remember in Estah Society

Atchuta Rao and his achievements through Estah society is something what I have heard since I joined GAP. So, when there was a field visit planned to Estah’s model farm, how could I miss it?

On 26th May, me, along with the GAP team and some of our coaches visited a model farm of Estah society at Bagepalli. Bagepalli is a quaint little village of 30 households, about 90 kms away from Bangalore. We met Atchuta Rao and his team over breakfast and headed to Bagepalli!

As we entered the farm, we were greeted by a bunch of cherubic children, basking in the sun and enjoying their summer vacation. The farm is one acre of land owned and taken care by Murthy Nayak and his wife.

Amidst vast arid lands, lay a lush green farm. Watermelons, musk melons (the sweetest I have ever tasted, could give sugar a run for its money!) tomatoes, bitter gourds (all hidden beneath the dense growth of leaves), brinjals (eggplants), ridge gourds and cucumbers (whew!), all this in just one acre of land!

Bright orange Marigolds adorned the perimeter of the farm, what a visual treat it was! Little did I realize that these flowers were “beauty with a cause”! The marigolds were used as a natural insecticide. The orange marigolds were a feast for human eyes and a feast for insects!

Atchuta and his team shared that the farm had 3 cycles with multi-crops, so that the farmer has even produce throughout the year along with 14-15 varieties in every cycle and the risk was spread.

Hmm, what was multi-cropping? It was a process of planning multiple crops to minimize the risk associated with one crop. In simple terms, not putting all eggs in one basket!

Apart from sharing knowledge on how to cultivate multi-crops, providing chemical free fertilizers, using traditional techniques to protect the fruits and vegetables, Atchuta was also helping Murthy market his produce in smart ways! Never knew farming had so many facets and challenges!

One question that kept popping in my mind was “Why would Murthy or a farmer trust Atchuta?” After all, the land belonged to the farmers. Then Achuta explained how he visited villages, spoke to the farmers at mandis, listened to their problems and offered to partner with them. Why wouldn’t they? They had a more stable source of income, their whole cultivation process had guidance, marketing of the produce was taken care of and they had better standards of living when compared to earlier. 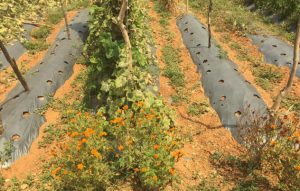 The plants were covered with plastic sheets and had holes at a regular distance. I wondered what the holes were for and what was the use of plastic sheet? Then, Atchuta explained that it was a protection against weeds with holes for the plants to grow. Wow, mulching in a unique way!

Post the farm visit, I relished delicious “Kadabu”- a sweet fried wanton and “Ragi Sevai”- noodles with jaggery syrup garnished with powdered pulse at Murthy’s house which was a stone’s throw away from the farm. The hospitality extended by Murthy and his family was truly heartwarming. Someone rightly said” India’s heart lies in its villages!” 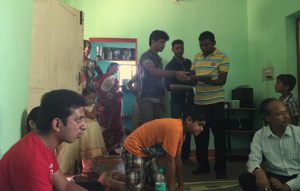 No visit to a village is complete without its traditional dance. Then came the grand finale- the impromptu Lambani dance performed by the women. Their hands were the drums, their voice the vocals, their dexterity just amazed me!

Like all good things need to come to an end, it was time to say good-bye and head back to Bangalore (of course with our booty of fresh organic vegetables and fruits!)